Hey mograph peeps! This is my second article on creating 360º VR videos. If you missed my first article about the Shiny Sphere method in C4D (no plugins needed!!!) you can check that out here: 360º VR Animation with Cinema4D.

This method produces essentially the same results, but there are some differences in workflow. Lets take a look before we begin.

Uses the Render Queue so you get access to Multipass layers, Team Render, and the handy dandy progress bar, etc.

Need to stitch the 6 outputs together and warp them into an Equirectangular video so that it looks right when uploaded, which requires a plugin (or some tedious mesh warping? I go for the plugin)

Setting up your Cameras

The 6-Cam method uses 6 standard Cameras pointing in all directions to capture your scene in 360º.

Set up your first camera and label it FRONT. Make its focal length 18mm. Cmd+B to open up render settings real quick and set your output to 1024×1024 (recommended for best final output) or some other 1:1 size.

Create a second camera in the exact same spot (copy+paste), turn it 90º to the LEFT and label it LEFT. and so on for RIGHT, BACK, TOP, and BOTTOM. Sweet! You should have a cube of cameras. I recommend attaching these to a null so you can move them around and creating a separate camera for previewing so you don’t fuck them all up. 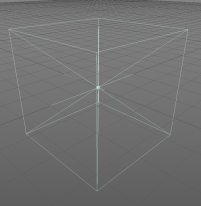 Next thing to do is set up your Render Settings. Make sure your Output Size is 1024×1024 and set your save location. You will be doing a render for each camera, so I recommend making a folder for your FRONT image sequence, and another for LEFT, RIGHT, and so on. You can set up your multipasses and whatever else you need to.

Now when you are ready to render, pop it in the Render Queue with the camera set to FRONT. Duplicate this render 5x in the queue. Match up the Cameras and Save Paths with their respective renders and press go! Then go do something because this might take a while! But you’re used to this by now. 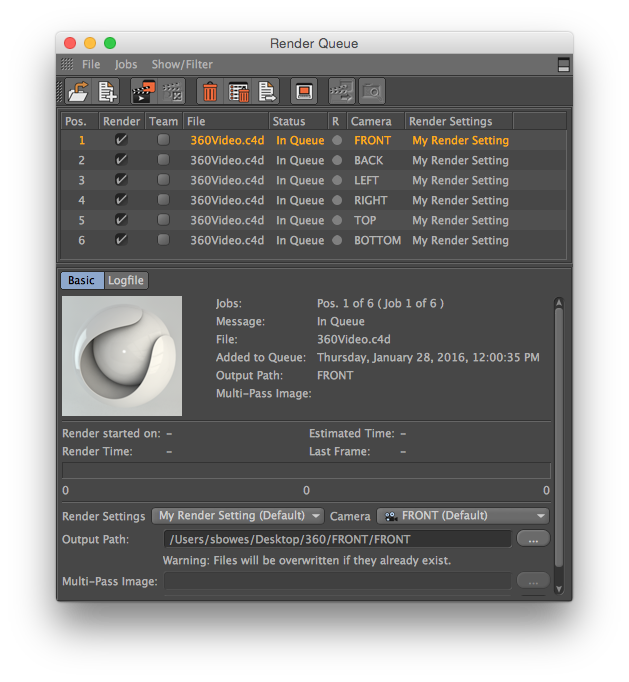 I use Mettle Skybox  ($99) for this and it works great. Skybox will do what I describe here, but if you want some advanced tools for compositing and previewing check out the Studio version. Chris from the Mettle team is a super nice guy and helped me out a ton with understanding how the workflow works. No he is not paying me, it just feels even better to give my money to good people who are passionate about what they do and excited to share the knowledge.

Anyway, Pop your footage into AE. We are going to make a cube map, with LEFT, FRONT, RIGHT, and BACK lined up horizontally across the comp. TOP and BOTTOM go above and below FRONT.

Take this comp and put it into a new comp. Throw the Skybox Converter effect on it, and convert from Cube Map to Equirectangular. 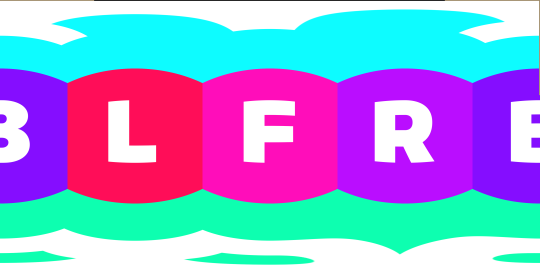 Render that shit out of AE! You’ll need an MP4 version, so I recommend using Adobe Media Encoder’s H.264 preset. Next you need to prep the file for upload.

I’ve got an AE template (FOR FREE) here. [SKYBOX LICENSE REQUIRED] Option+Drag’n’Drop to replace each solid with its respective footage and zim-zala-bim! magic makes it look right in the output comp!

YouTube is working on just being able to know that these bizarro looking videos are 360º VR vids, but at the moment its not built in. They released a tool here that adds a line of metadata to your video file that tells YouTube that it is made with a spherical camera. Scroll down to ‘Prepare for Upload’ and choose Mac or Windows version.

Toss your mp4 in the app, press Inject, and voila! The metadata has been added.

Upload that sucker to YouTube and tell your Mom to check out the cool thing you did!